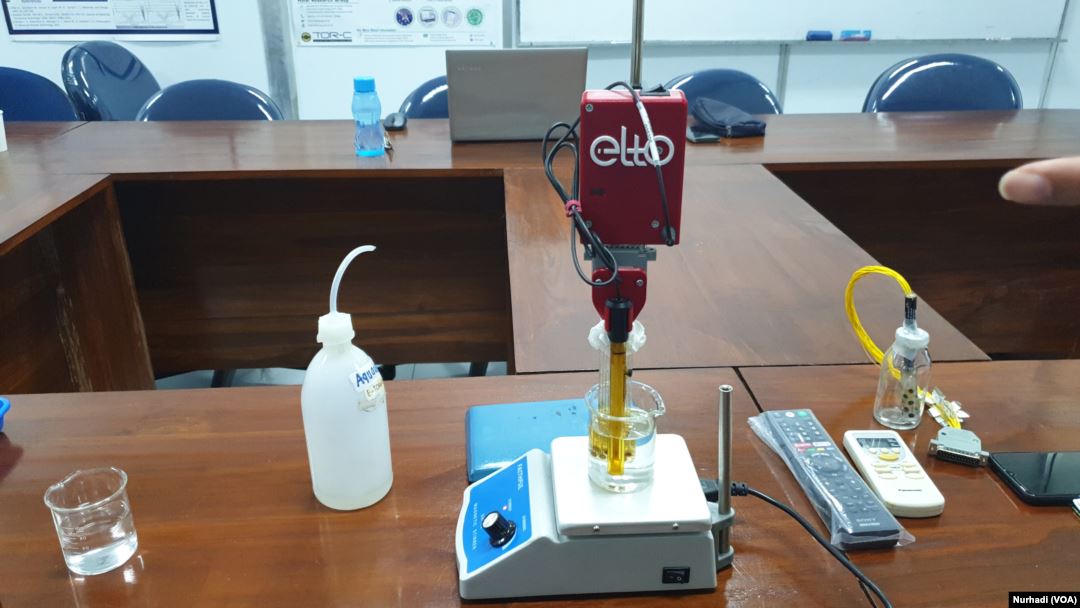 Electronic tongue is a fairly common technological product found. A lecturer and researcher at the University (Gadjah Mada), expanding it with various advantages.

Made Meita Puspadewi showed the lines on her laptop screen through a program called Elto Data Logger. The line is formed, as a result of testing the taste of the electronic tongue (e-tongue) that is next to it. By This tool, the taste that is usually tasted by our tongue, is manifested in numbers. Through a Bluetooth connection, data is box from the electronic tongue in real time.

"We use basic taste first to classify, later if there are other samples We can classify what flavor is more dominant. Here is MSG for umami, more savory, then HCL is more sour, there is NaOH for bitter taste. In addition there is glucose as a sweet taste,  "said Meita.

Meita is a Masters in Physics at the Department of Physics, Faculty of Mathematics and Natural Sciences, Gadjah Mada University. Together with a number of other students, Meita practiced the work of the electronic tongue at the Laboratory of Material Physics and Instrumentation at the local campus.

Occupying the third floor in an old building, this laboratory is divided into several rooms. There was no elevator, so the stairs became the only walkway to reach the top floor. A number of students seemed busy with their assignments. There are those in the laboratory, workshops, or sinking in front of their computer screens.

However, behind its simple appearance, this laboratory holds extraordinary works. One of them is an electronic tongue device, which is claimed to be the smallest in the world. The developer is Kuwat Triyono, a doctor of physics who began to explore the electronic tongue in Japan.

Since 2016, Kuwat has been seriously developing electronic tongue devices. Students like Meita, helped him in the research of the targeted tools that will be mass produced next year.

This tool is named Elto, and is in the process of patenting. The main components are the array of taste sensors as work electrodes, reference electrodes, data acquisition systems, and artificial intelligence (AI) systems. All of that is connected wirelessly to an Android-based computer or smartphone. Dimensions are only 105x73x35 mm with the support of one 3.500 mAH lithium battery energy source. Its small size makes it easy to carry, and can last up to 14 hours for continuous operation.

"The principle works if there is a sample, it must be in liquid form. So if it's still solid, it will be thawed. Why is it thawed, because it can later be broken down into ions. Then Dip the sensor. There are many sensors. Why many? Because We can't guess what is in this sample it feels anything. With a lot of sensors, what is formed is a pattern, and we extract the pattern,  "said Kuwat.

Elto was born because Kuwat was convinced that what Indonesia needed was a small device with various functions, which was easily spread throughout the region. Concern that many agencies cannot afford to buy similar tools made in foreign countries, instead triggers the birth of creations with many advantages.

According to Kuwat, Elto has a number of advantages compared to similar devices that exist today. Its small size, which can even fit into a pocket, is a major breakthrough that makes it superior. Similar tools, which are used in many institutions and universities abroad, are large and expensive. One unit of the same tool made in Japan, the average price of Rp 2.5 billion.

The high price gave birth to concern for Kuwat. Moreover, he knows many agencies in Indonesia who need an electronic tongue. For this reason, Kuwat believes that if mass production has been carried out, the price of this tool can be reduced to only Rp. 25 million. Therefore, Cheap is another advantage of Elto.

"I want this tool to be spread in Puskesmas throughout Indonesia so that the service is better and faster. Also the police, halal institutions, food industry and others,  "said Kuwat.

Although small and way, Elto only takes about two minutes to display results. Naturally, if Kuwat ensures, this fast performance is another advantage that must be stated. Even so, its accuracy reaches 98 percent, and has been calibrated at a university in Braganca, Portugal.

As an electronic tongue, Elto will function according to the role chosen for the tool itself from the start. Before being used for a particular purpose, Elto must be trained in advance to recognize various products that might be related to that purpose.

For the police, this tool is able to detect quickly various types of drugs to gorilla tobacco. No need to enter the laboratory, police in the field can test the urine of someone suspected of using drugs. For This function, Elto will store memories about various types of drugs, and will recognize them once tests are conducted.

For The food industry, this tool can find out the quality and authenticity of the product. For example, whether Zam-Zam water that is packaged and sold in Indonesia is truly authentic. It could also, the quality of coffee or tea whether premium, medium or ordinary. For the halal industry, Elto helps check food or beverage content quickly and easily.

Kuwat also explained Elto's other benefits, for example in the fruit trade.

"This tool allows us to send flavors to all corners of the world. If There are zalacca buyers from Japan, for example, he wants to know the taste and quality of zalacca, we only need to taste tests here, then the results are sent via the Internet, and buyers in Japan will already know how to taste and quality based on the standards made,  "said Kuwat.

In the field of medicine, Elto will also be able to play a role. Currently, development in the sector continues to be carried out in collaboration with the UGM Faculty of Medicine.
Facebook Twitter Telegram