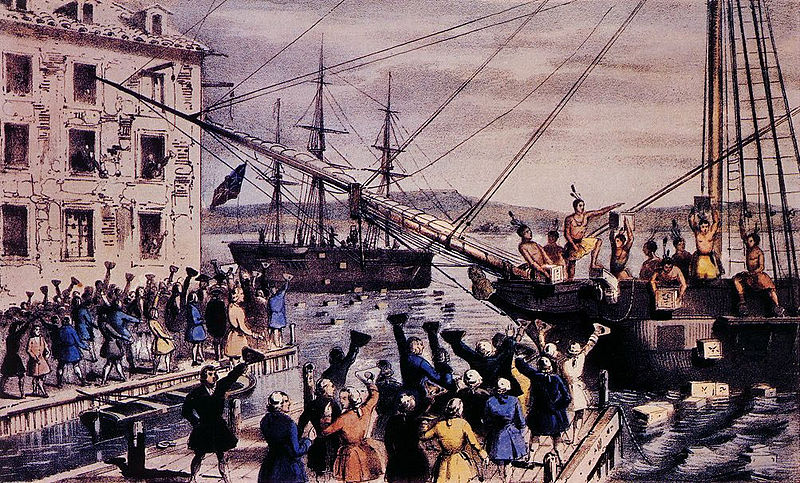 There are some events that took place during the historic time when America was declaring its independence from England that are so historic, so iconic that they have taken on the status of myth and legend as much as history.  And certainly the Boston Tea Party fits that description.  This is such a stand out event in American history that it is common to see school children reenact it during elementary school plays or skits.  And the participants names including John Hancock, Paul Revere and John Adams have similarly become classic heroic figures in American folklore and history.

But the events of December 16, 1776 were not fable or myth but real and important parts of the development of the American Revolution that was crucial to the early foundation of this country.  The situation of taxation that was being imposed by Brittan on goods that were coming into the colonies was one of serious stress on the colonists because they had no control over those taxes.  And that tax situation was made more extreme with the relationship between the British government and the East India Tea company who was receiving tax breaks for their goods that would place them at a competitive advantage in the Americas.

These kinds of preferential treatment only aggravated the already tense relationship between the colonies and Britain and many in leadership over the American states saw the way England was handling the situation as conspiratorial to try to hurt the economy of the growing new country and to impose restrictive rule through taxation on the colonies and the colonists.  That is why that famous proclamation “No Taxation Without Representation” became one that is historic for the outrage against the English that took the colonies into revolutionary war that eventually lead to the independence of the American colonies and the beginning of a new country.

Finally on Thursday, December 16, 1776, decisive action needed to be taken.  And our forefathers were nothing if not known for bold and decisive action in the fact of tyranny.  The East India Tea Company had docked the HMS Dartmouth in Boston harbor full of a fresh import of tea for the colonies.  It was time for the colonists to make a statement that this unethical and immoral use of taxes on tea was for all intents and purposes an act of war and they were going to treat it as such.

Badly disguised as Indians, the brave colonists boarded the HMS Dartmouth and her sister ships, the HMS Beaver and the HMS Eleanor and skillfully and efficiently dumped the entire delivery of tea into Boston harbor.  All totaled, over forty five tons of tea went into the water that night.  It was a stunning blow.  But more than that it was a slap in the face of the British government and a gauntlet laid down that their attempts to rule the colonies b tyranny were not going to be tolerated any longer.

This event was pivotal in pushing the hostilities between England and the colonies past the “nuisance” stage and setting forces in motion for war.  But more than that, it was such a bold statement of defiance that many colonists were inspired to join the increasing chorus calling for war and independence.

For loyal Britains, the idea of separating and forming their own country was hard to grasp.  But the leadership of the men who planned and executed the Boston Tea Party demonstrated a new independent spirit.  This was the kind of backbone, the sense of pride and independence that was to come to define the American spirit in years ahead.  But it took the courage and boldness of this little band of men to demonstrate that being trod on by a foreign tyrant was not something we had to put up with.

It made a statement to England and to the colonists at the same time that revolution was possible and they really could think of themselves as free people who would bow to no king.  From that time forward the independence of America was inevitable.  These visionary leaders showed us an America that gave power to its people, not to kings or governments and the result in how America works and our lives are lived is the direct outcome of bold protests such as the Boston Tea Party.
Facebook Twitter Telegram