Virginie Viard drew the curtain on the Grand Palais yesterday with a Chanel Spring 2021 show with cinematic flair. It was brought to life with ecru and black tweed suits, jeans in fluorescent hues, floaty asymmetrically-cut dresses with sheer accents, logo-print shirts in neon, capri pants, and long dresses with printed flowers in black and white. It was a sassy and covetable collection as any, with plenty of details like miniature bag belts, velvet ribbons, and voile headpieces decorated with pearls for the eagle-eyed. For those who have already seen the just opened 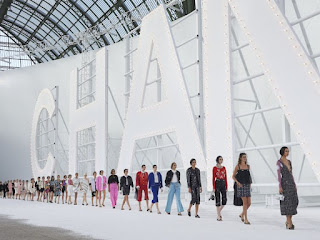 Chanel exhibition at the Palais Galliera, they will note that some of the later evening looks (scroll down) recall of Twenties Chanel with undeniable freshness. Read on to learn five things about the Chanel Spring 2021 show. ONEThe Chanel show was preceded by a surrealist cinematic black and white film by by Inez van Lamsweerde and Vinoodh Matadin. The duo, who shot Vogue Arabia’s very first cover featuring Gigi Hadid, edited an extraordinary mashup of some of France’s most celebrated films of yesteryear—including Jacques Deray’s Swimming Pool and Pierret le fou by Jean-Luc Godard. Three French grand dames of cinema, Romy Schneider, Anna Karina, and Jeanne Moreau all made appearances. Across what appears like a maquette of Los Angeles, the camera scans over the Santa Monica hills, where “Chanel” is featured in the place of the Hollywood sign, transporting the viewer to Paris. That same sign was front and center at the Chanel show. TWOThe Chanel Spring 2021 show was the avant-last hurrah at the Grand Palais before the famous glass and iron exhibition hall is renovated with help from the fashion house to the tune of 25 million Euros. Renovations, led by chief architect of historic monuments, François Chatillon, are expected to begin next year and will continue through until spring 2024 in time to host the Olympic and Paralympic Games. THREEThe collection was a tribute to the muses of Chanel. “Some of them are far away, it’s been a long time since we saw them,” said Viard. “Gabrielle Chanel and Karl Lagerfeld dressed so many actresses in films and in real life. I was thinking about them who make us dream so much. But without wanting to replicate. Without falling into a vintage citation. I wanted it to be very joyful, colorful, and very vibrant too.” FOURAs for the mood, more specifically, Viard was thinking about actresses at the photocall and the red carpet, “That moment when they’re being called to by the photographers: their faces a little distracted, their attitude a little out of sync with the outfits they’re wearing. And then there are the fans waiting for them behind the barriers, this very lively side to cinema that happens beyond cinema, that’s what I like.” The music accompanying the show, was as usual by Michel Gaubert and featured songs like Spotlight by Jessie Ware (finale). You can listen to the full set here. FIVEModels Rianne Van Rompaey, Mica Argañaraz, and Louise de Chevigny are lensed by Inez and Vinoodh in cinematic situation: on the phone, looking out the window, sitting on a bed, and walking down the street, like in a film. “An evocation of the Nouvelle Vague, of Italian cinema and of Hollywood,” shared the notes. “Because the world of Chanel evokes so many images, a whole unconscious that’s linked to cinema,” states Viard. “Playing on the idea of repetition, the women all enact the same gestures,” share Inez and Vinoodh. “They are each clearly in their own world but together represent what we feel is Chanel’s way of fitting into the lives of every woman with a cool and easy allure.”