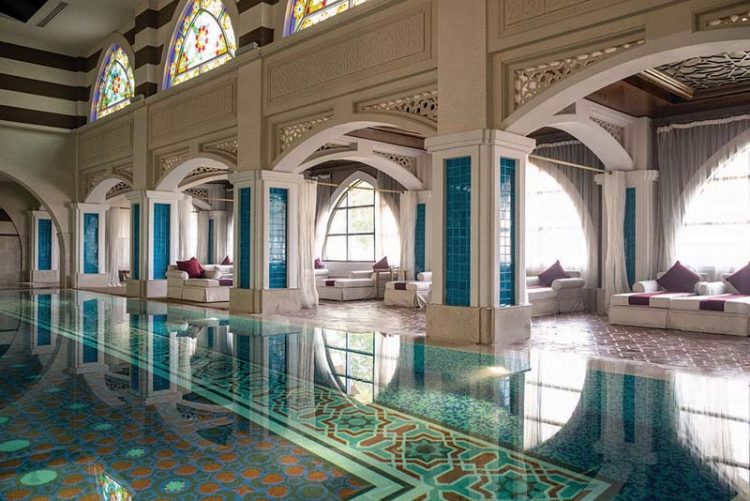 In the centre of a high-ceilinged room stands a marble göbek taşı, also called a navel stone, from which copious amounts of heady steam emanates. It is where one lies to experience what is arguably one the most authentic Turkish hammams in Dubai.

As therapists vigorously buff guests, then methodically fill jugs of warm water that overflow from fountain niches, the feeling is of a companionable silence – a shared ritual under a mosaicked dome. Steam clouds the air, and the only sound is water gushing from taps.

It’s easy to forget that you are in a hotel on the man-made island of Palm Jumeirah, itself just a stone’s throw away from the popular marina and beachside.

One of seven Jumeirah properties in Dubai, Zabeel Saray opened eight years ago – quickly becoming known for its getaway feel and Ottoman elements (the latter perpetuated by seemingly endless goldplated columns). The resort has 405 rooms and suites, 38 Royal Residences and the award-winning Talise Ottoman Spa, one of the largest in the Middle East. The rooms range from a Club double – with rain showers and Penhaligon products – all the way up to the Grand Imperial Suite on the highest floor, which boasts its own private sauna.

For a longer stay, try one of the four and five-bedroom villas, which come with their own butler, shared access to a lagoon that loops round the villas, and a separate beach. With their own entrance, it is easy to feel like one could live here permanently – our butler confides that there are families that have done just that, their longest resident having lived onsite for five years.

As well as eight restaurants, guests can book with the option of dining at other Jumeirah eateries – useful if you’re in a different area for the day. A surprising luxury is the private cinema, a complimentary 29-seater screening room. Grab a squishy sofa and popcorn, and curl up to watch a classic Hollywood gem, finishing the evening with a stroll along the Palm’s white sands.

The brunch at Imperium is themed according to the day, putting the chefs’ talents to considerable work. Try going on Friday for the French day, with champagne to accompany lobster and escargots. On any day, the highlight is a room dedicated to dessert, with ice-cream stand, chocolate fountain, and tables groaning with intricately-designed cakes.

Known as one of the best Lebanese restaurants in Dubai, Al Nafoorah has high ceilings, live Arabic music on the terrace and lesser-known delicacies that include jergier with beetroot, shanklish, or ashtha bil asail – a fresh cream studded with almonds, pistachio & honey.

Wagyu Beef scotch eggs, John Stone short ribs, Boston lobsters – provenance is king in this meat lover’s palace, located on the ground floor of the hotel. With cosy niches, leather sofas and a saxophone soundtrack – the mood is akin to an intimate jazz club.