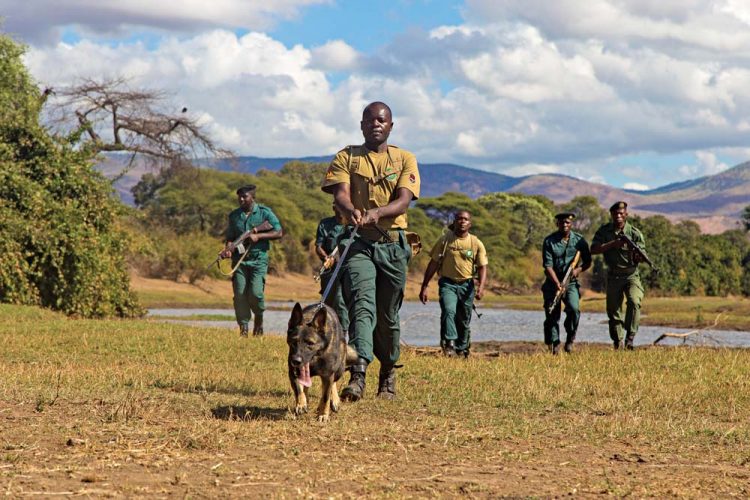 On the banks of the mighty Zambezi, a territorial hippo pod is the only neighbour to a cluster of dusty buildings – the headquarters of an NGO that’s leading the fight against wildlife crime in the Lower Zambezi. Being on the western edge of a transboundary national park doesn’t restrict freedom of movement for everyone. “Animals don’t have borders,” says Hanneke Hogerheijde, Conservation Lower Zambezi’s (CLZ) project manager, as a bull elephant confidently strides into Zimbabwean waters.

Spurred on by the plight of these great pachyderms, the NGO formed a quarter of a century ago – back then, its iteration was just one beat-up Land Rover and a tarpaulin office. Since 1950, poachers have killed 90 per cent of Zambia’s elephants, whittling down their numbers to just 16,000. These critical tourist assets and ecosystem engineers are just one iconic megafauna that CLZ is tasked with protecting. Black rhinos aren’t on the list any longer – they were poached out of existence in 1998 after two decades of bloodshed. 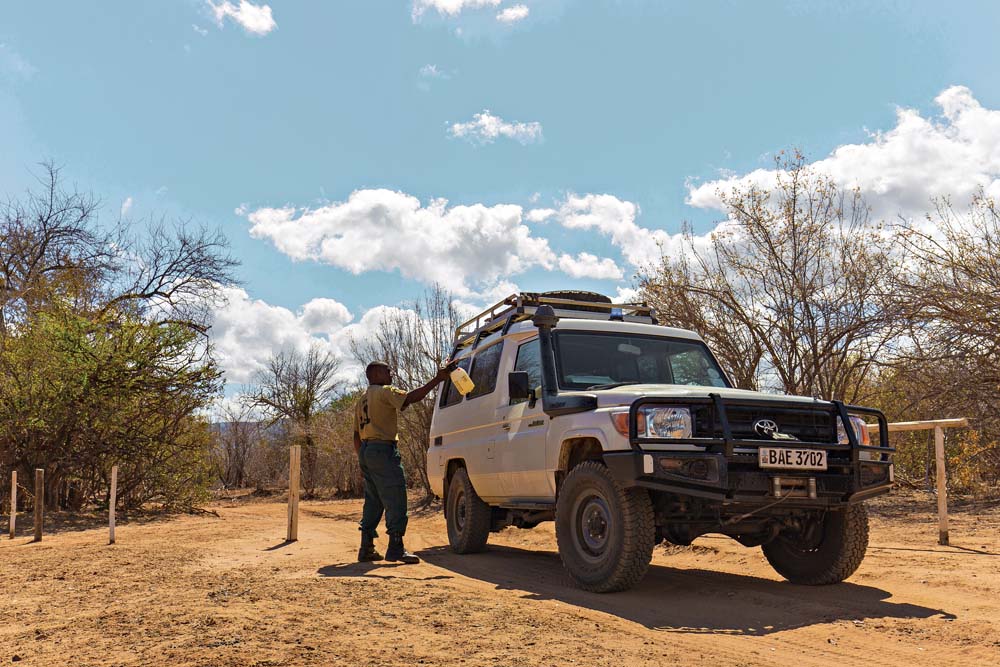 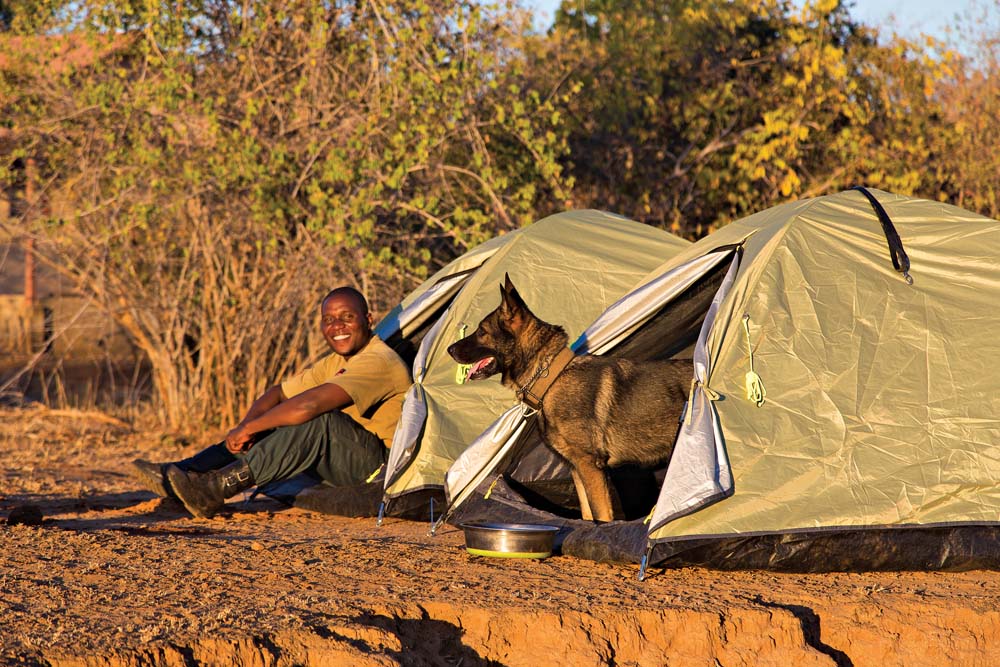 In partnership with the Department of National Parks and Wildlife (DNPW), CLZ’s conservation approach fires on all cylinders, running environmental education and community engagement programmes, as well as rapid response and community scout units.

The latest reinforcements to its counter-poaching arsenal are a four-man, two-dog Detection and Tracking Canine Unit. No amount of boots on the ground can match a dog’s acute sense of smell, 10,000 times stronger than ours.

“The nose is a muscle which needs to be trained continuously like an athlete,” Hogerheijde tells me. When German Shepherds Lego and Bar aren’t out in the field, they’re honing their most valuable asset on the camps ‘nose wall’, planted with traces of ivory, ammunition, bushmeat and rhino horn. The reward for finding this said contraband? A good old-fashioned ball, which Bar retrieves with lightening speed from Adamson. A former scout, he joined CLZ a decade ago, becoming Bar’s second handler in 2016 after rigorous training. Their bond is heartening. “He’s my best, best friend,” Adamson beams. “He knows my behaviour A to Z and vice versa”. No wonder. They’re spending three weeks at a time together (typically four days in camp, six days on operation). One day could be setting up strategic roadblock cones for spot vehicle checks, the next practicing “tracking” spoor and sweeping houses for cat skins.

Patrolling with CLZ’s intel-led, AK-47-wielding rapid response unit is more ad hoc. It can involve four-day walk-ins, staying in one location for a fortnight. The GPS is set on Lower Zambezi National Park, but bordering GMAs (Game Management Areas) like Chiawa to the west, Luano (north) and Rufunsa (east) are scouted too, amounting to an area of 20,000 square kilometres. One of the project’s major obstacles is “the size of area, not the capability of the dog,” Hogerheijde asserts.

Lego and Bar’s other nemesis are trypanosomiasis-infected tsetse flies. It’s a military-style operation protecting them from the potentially fatal bite. As well as bimonthly jabs, the dogs are sprayed four times daily with heavy-duty repellent, along with their wheels; a souped-up 4×4 with gauzed AC’d kennels, a bush luxury CLZ’s team aren’t even afforded. All this comes at a price – around US$250,000, which bankrolled the project’s first two years. But already it’s an investment that’s paying off. In 2018, Lego and Bar undertook 202 operations, apprehended 20 suspects, seized 21 firearms, 300kgs of bushmeat and one pangolin – the world’s least-known, yet most-trafficked animal.

One of Bar’s early busts, Adamson reveals, was uncovering two ivory tusks in the luggage hold of a bus on Lusaka’s Great East Road. “They were smothered in baby powder and stuffed into a rucksack.” Fish, charcoal and maize are commonly bundled with smuggled items to try and throw dogs off the scent. Bushmeat (which commands $5 a kilogramme on the black market) is particularly pungent, and, according to the Wildlife Conservation Society, its illegal trade represents the single greatest threat to Zambia’s wildlife. “With something you’re buying out of the back of the car, you’re not really sure what animal you’re eating. It could be kudu, lion, zebra,” a representative from Zambia’s Wildlife Crime Protection tells me. “The meat can carry diseases (like anthrax) and it’s often not known its illegal.”

Culturally rooted and difficult to police, subsistence poaching presents its own set of problems. CLZ’s chief driver and longest serving employee, Dick Karidza, 58, is a reformed poacher from Muguloamena (a village 33km away) who hunted bushbucks and warthogs “just to have meat for the family”. It’s estimated three quarters of Zambians live on less than $1.25 a day. He hunted with 10 dogs (his only interaction with man’s best friend before CLZ) and wire snares, which indiscriminately maim big cats, often leaving abandoned cubs. Lower Zambezi is one of the country’s strongholds for lions, as well as endangered species like Wild Dog. Karidza admits; “now wildlife is part of my family.” 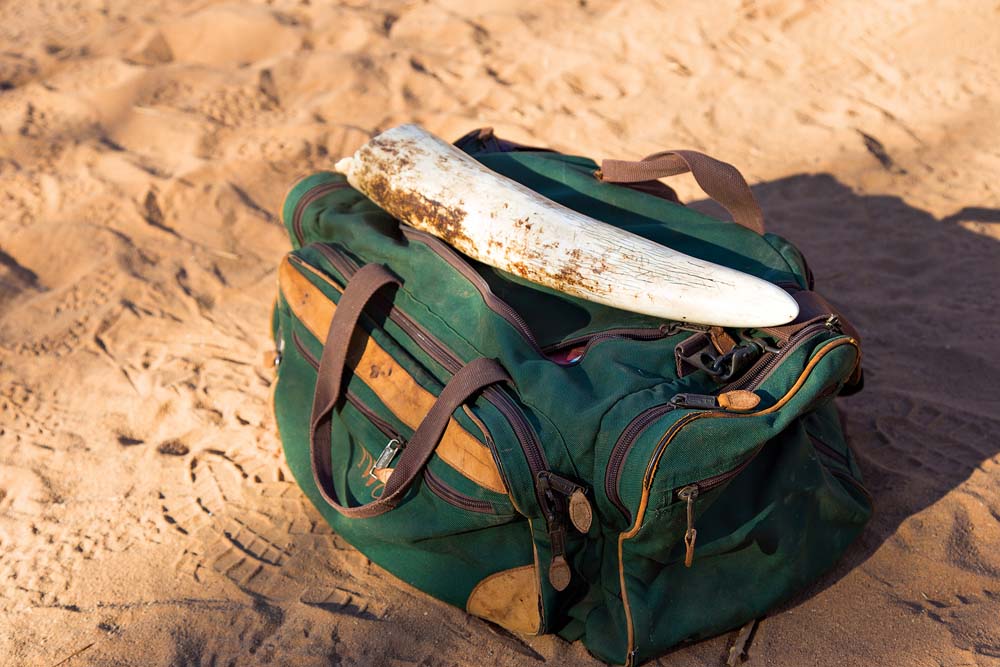 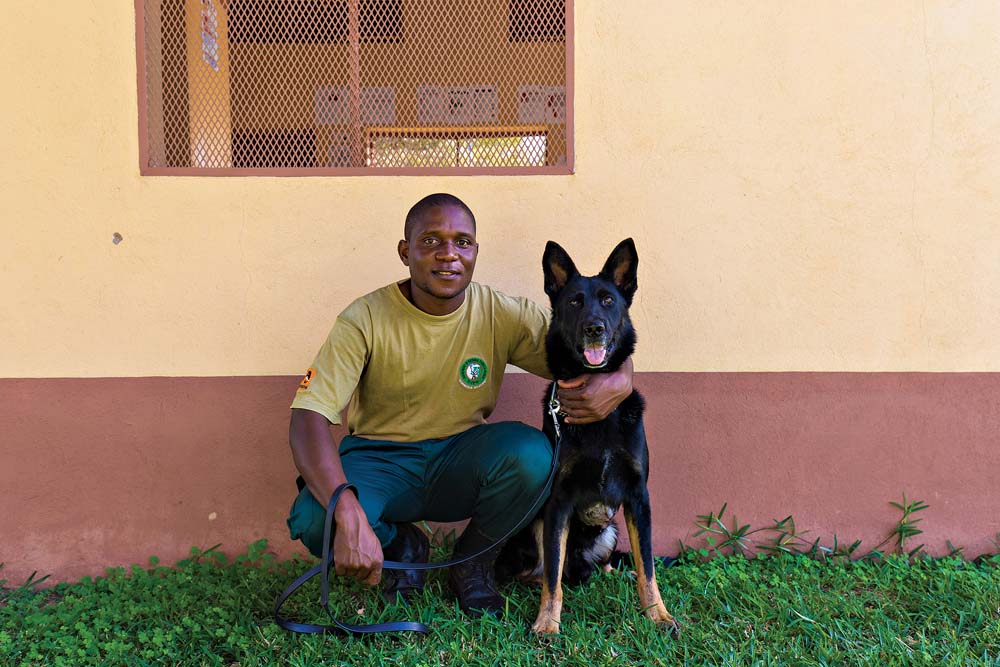 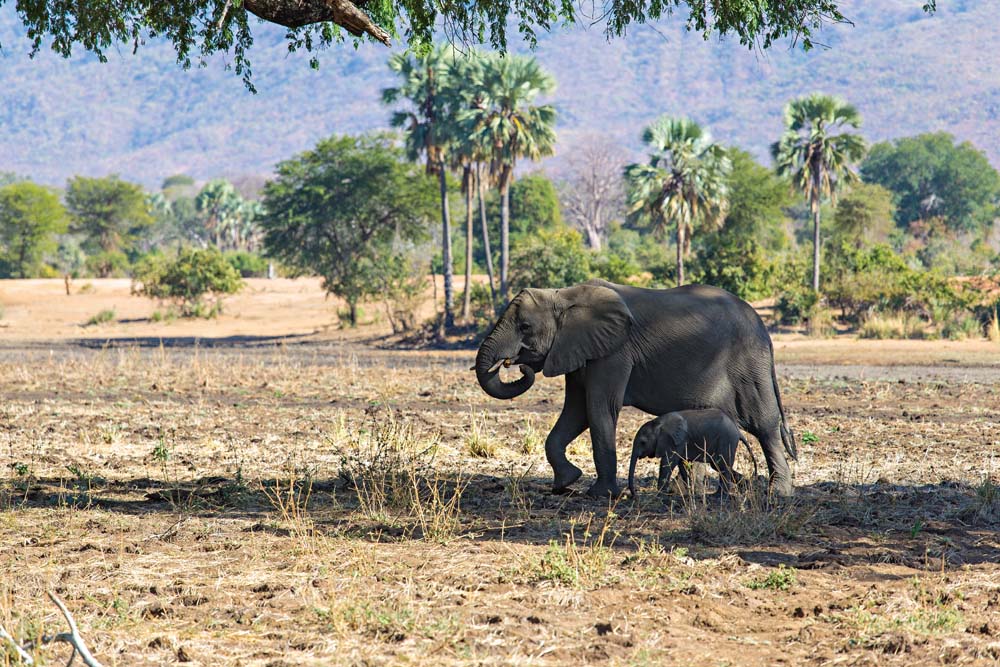 The two worlds of poachers and conservationists are messily intertwined. “Some may have a relative who is a poacher,” CLZ’s Besa Kaoma tells me, referring to the 150 children who attend their Environmental Education programme annually. Many come from farming families whose livelihood is at the mercy of crop-raiding elephants or hippos. With some 30,000 people inhabiting areas abutting the National Park, wildlife conflict and retaliatory killings of game is a reality. Overturning this negative perception of animals underpins the programme. One of Kaoma’s more memorable pupils from his outreaches was the daughter of a notorious poacher, nicknamed “Macabbage.” Now (ungracefully) retired, he was probably one cog in a poaching syndicate.

“They see animals as theirs to harvest, no different to picking a berry from a bush to eat” British Army trained Jay Crafter tells me. The co-founder of Invictus K9, which trains and deploys canine units for anti-poaching and law-enforcement, piloted the first programme in Zimbabwe, his motherland. In four short years they’ve established seven similar dog units in sub-Saharan Africa, including CLZ’s. But there’s still a long way to go. “It’s lawless, it’s the Wild West,” Crafter says of Africa’s multibillion-dollar illegal wildlife trade. In Zambia, if you’re caught in the possession of trophies you can do ten years of prison time and 25 for illegally hunting an elephant. Penalties aside, Lego and Bar’s presence alone is a deterrent, Crafter points out. “Everybody knows that the dogs are capable of finding stuff. That in itself is a psychological threat.”

Since writing this story, Lego tragically lost his life to poisoning. The matter is under investigation.