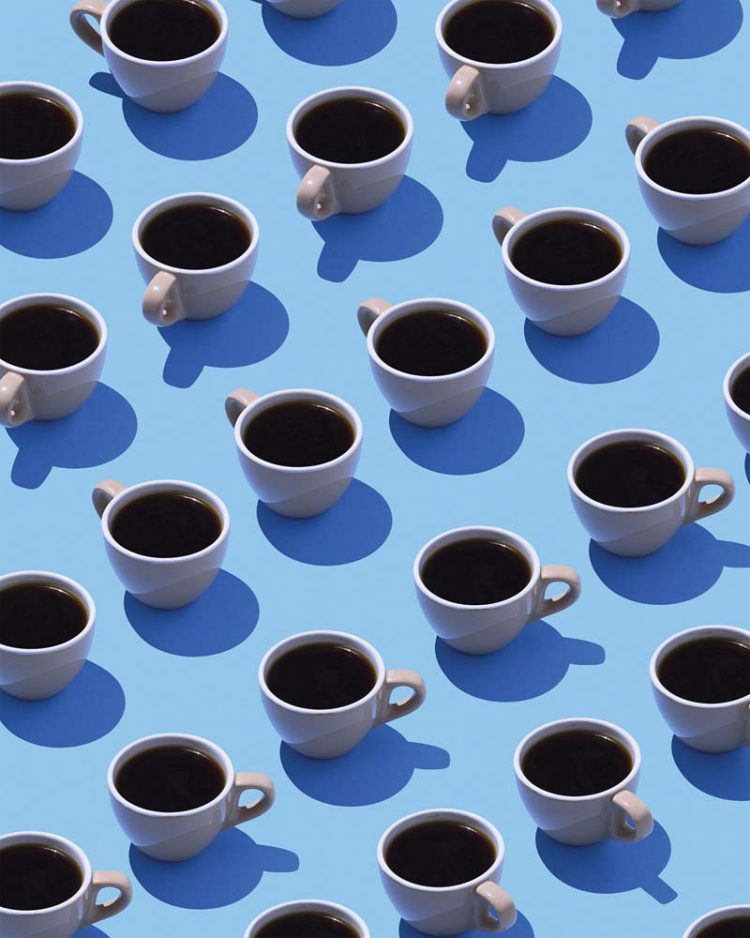 Could a pair of coffee beans reshape everything we know about coffee? According to Antony Wild, historian and author of Black Gold: The Dark History of Coffee, the discovery of two coffee beans in an archaeological dig in Ras Al Khaimah suggests that gahwa (Arabic coffee) was being traded in the region some 300 years before it’s said to have first proliferated in Yemen.

“It’s all a bit mysterious, but there is archaeological evidence that coffee has been consumed in the region since the 11th century,” Wild explains of the carbonised roasted beans, which were unearthed at Kush, in Ras Al Khaimah in the northern UAE.

“My generally held theory is that based on this find, there could have been a genuine coffee trade throughout the region a lot earlier than we first thought,” he adds. “Of course, this would require all of the myths and legends to be retold.”

The birth of coffee

There are as many twists and turns in the history of coffee as there are beans in a bag, but one of the most popular legends traces back to Ethiopia in the 850s, where a goat herder named Kaldi realised that his herd became particularly lively after eating the berries from the native coffee bush. He shared his find with the local monastery, who dubbed Kaldi’s berries “the Devil’s work”, and threw the handful of beans into the fireplace. Entranced by the aroma of the roasted beans, they placed them into a pot of hot water and, after tasting the mysterious brew, were amazed by its uplifting effects. 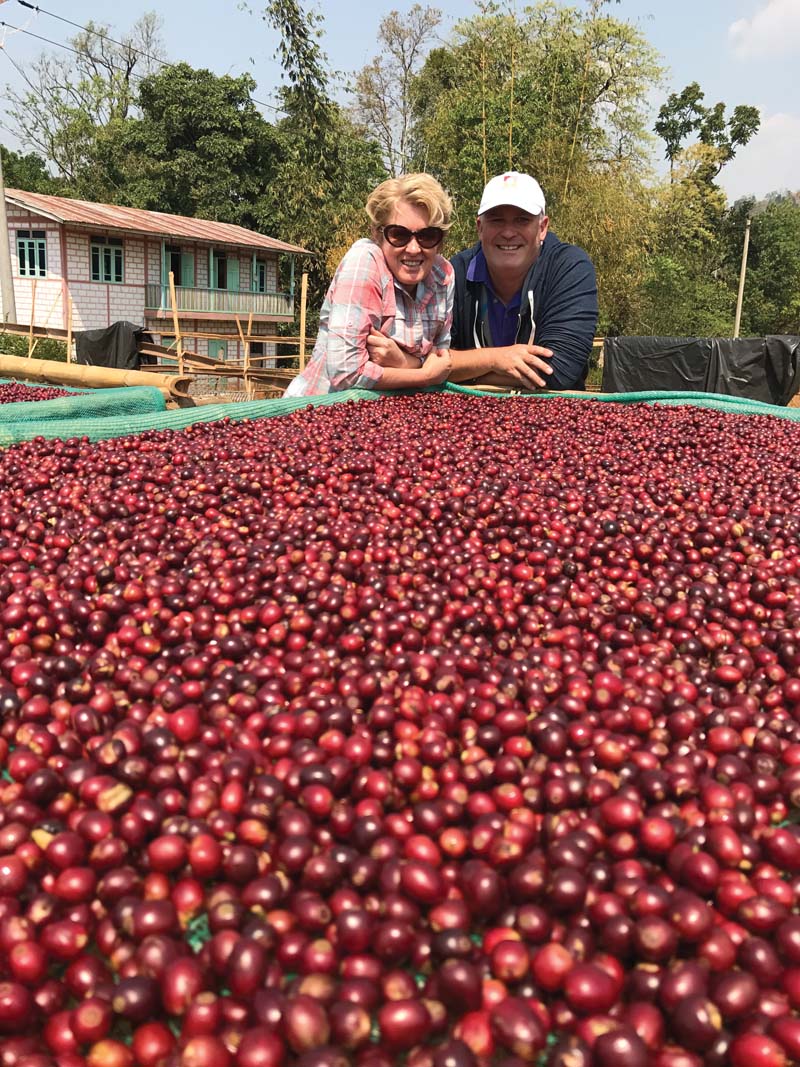 Similar tales surround the birth of coffee in Yemen, where the first credible accounts date back to the mid-1400s. Records show that Yemeni traders brought the beans to the Middle East from Ethiopia, and Sufi monks drank the brew to stay alert during their long hours of devotion. It was here, from the port of Mokha, that coffee made its way into the wider world, first via pilgrims on their way to Mecca, and then to Europe, where the ‘second wave’ of coffee emerged.

It’s this rich regional heritage that inspired Garfield Kerr to launch Mokha 1450 coffee boutique on Dubai’s Al Wasl Road in 2013. “The first wave of coffee was here in the Middle East, where coffee was first drank in its original form. The second wave was popularised in Europe’s coffee houses and cafes, and everything that’s going on now is the third wave,” Garfield explains. “We wanted to go back to the origins of coffee, and our name harkens back to the port of Mokha in the Yemen, where coffee was circulated to the world.”

That history is celebrated at the Dubai Coffee Museum in Al Fahidi, which showcases the birth of coffee and the evolution of technology to the present day. The museum’s director, Khalid Al Mulla, explains the significance of coffee in Arabic society, saying, “It’s deeply rooted in our traditional culture. The Arabian dallah (coffee pot) is a sign of hospitality, and it is present everywhere: in the streets; in hotels; even on the one dirham coin.” 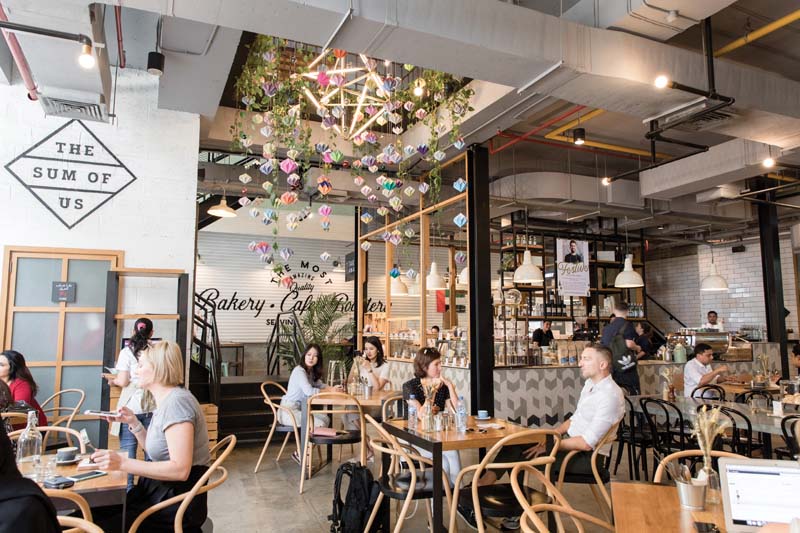 Coffee has long been at the heart of Arabic hospitality, and the majlis (sitting area), its hearth. “Even if a man had nothing in his pocket, he would always serve his guests coffee and dates,” says Al Mulla. Traditional Emirati coffee is delicate and aromatic, flavoured with a hint of cardamom, saffron, rosewater and clove. The fragrant blend is boiled on a stove then steeped for 10 minutes, before being poured from the dallah into tiny cups called finjan. Don’t be dismayed if your finjan isn’t filled to the brim, Al Mulla explains: “The server never pours a full cup; it’s generally one quarter to one third full, to encourage you to drink a number of cups during your stay – if he pours a full cup, it’s disrespectful, as it means he wants you to drink and leave.”

When he’s not explaining the intricacies of Emirati coffee customs, Al Mulla sources quality beans direct from farmers for his own brand, Easternmen & Co, and runs coffee education programs and competitions. “Coffee is the second biggest commodity after oil, and the second most consumed drink after water – and the UAE is considered one of the fastest growing coffee industries in the world,” he says. “The reason for this is education. Consumers have started to realise what good coffee is, and have changed their drinking habits. The transformation that has taken place is remarkable.”

One woman who has been at the forefront of that transformation is Kim Thompson of Raw Coffee Company, who launched Dubai’s first specialty roastery in 2007. At the time, she was struggling to source quality beans for her café, and so took matters into her own hands. “All the coffee was imported and not fresh. It was very darkly roasted and had a heavy American influence,” Thompson explains. “In the beginning we struggled with people accepting an 8oz cup, but we’ve progressed so much faster than expected. We were the first specialty roasters, and now we’re one of 54, a number that’s growing all the time.”

Another local success story is Coffee Planet, which has evolved into a multi-million dollar business since its launch in 2005. In mid-2019, the home-grown company announced the expansion of its Jebel Ali Free Zone roastery to accommodate a 25 per cent increase in sales, with a projected output of 3,000 tonnes of coffee per year. Managing director Robert Jones said, “This is an exciting time for the Coffee Planet team. In a region where the demand for high-quality, directly sourced products are on the rise, we plan to enhance the level of competition amongst brands locally by applying the best practices and the latest technologies in this industry.”

At Mokha 1450, those best practices include building relationships with growers in Yemen and Ethiopia to source exceptional beans, says Kerr. “One of the things that sets us apart is that many of our coffees aren’t available anywhere else. We work primarily with women’s cooperatives, and the farmers that work with us get the highest price possible – we compensate them for the additional effort and highest level of quality.”

Kerr and his team also pioneered the concept of having a range of extraction methods available, including Kalita and Chemex filters, syphon brewing, aeropress and V60. “With the opening of our branch on Palm Jumeirah, we pioneered table brewing, which creates a conversation between the barista and the diner.”

Globally, with the rise of freelance and flexible work, smaller living spaces and a renewed focus on health, coffee shops and cafes have become de facto workplaces, meeting spaces and lounge rooms. And nowhere is that more apparent than here in the UAE. Leon Surynt has tapped into that zeitgeist with the launch of Nightjar Coffee Roasters in Dubai’s arts hub of Alserkal Avenue. “It’s almost like the majlis was, but now you’ve got your coffee house where you and your crew hang out,” he says.

With the social media hashtag of #CoffeeOverClubbing, Nightjar draw a young crowd to its edgy warehouse space for frothy, tall glasses of nitro cold brew, drawn from draught hops taps at a copper bar. “We built Nightjar to look like a bar, and our cold brew is served so it looks like a beer.” A combination of climate and social cache have seen Nightjar’s sales of cold coffee equal their hot coffee orders. “This validates what I was thinking – we have a young demographic, many of whom don’t drink alcohol, but they want something that looks a bit haram [forbidden],” he suggests.

At Raw in Al Quoz, the café-roastery performs a similar social function. “We’re all looking for our tribe here in Dubai, so we wanted to create a community space, to create a sense of place for artists and other small businesses, and to offer a relaxed environment that doesn’t cost too much,” says Thompson. Along with enjoying a meal and an expertly poured coffee, visitors can sample various beans and roasts, take a barista class, or join a two-hour tour to follow the coffee journey from crop to cup